Visited by U.S. presidents, traded for a farm, home to a railroad company’s offices, site of a grand dance hall and base for regular Lowell Thomas broadcasts, the Green Mountain Inn has a rich and storied history. The Main Inn and Old Depot buildings and Sanborn House are listed as Numbers 13, 14 and 105, respectively, on the National Register of Historic Places. 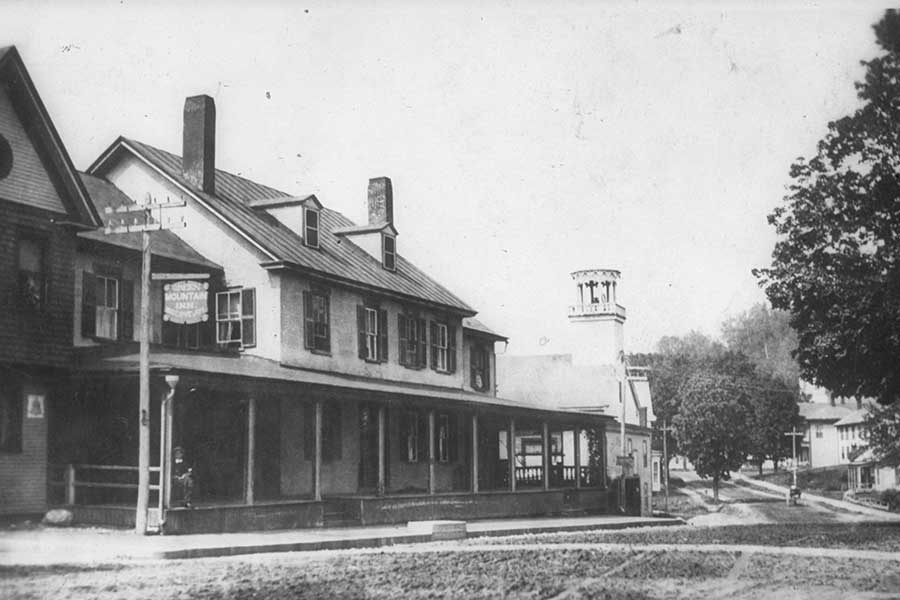 Peter C. Lovejoy originally built the property in 1833 and later traded it to Stillman Churchill for a 350-acre farm. Churchill, who added two brick wings, a large dance hall, a double front porch and renamed the building Mansfield House, lost the holding in a mortgage foreclosure to W.H.H. Bingham from whom Churchill had borrowed money. Mansfield House operated as a hotel, was later transferred to W.P. Bailey and renamed the Brick Hotel, and in 1893 became the Green Mountain Inn when it was purchased by Mark C. Lovejoy. In 1897 the Depot Street building was built to house the Mount Mansfield Electric Railroad and the Sanborn House was bought to become a blacksmith and livery.

The Inn has played host to many famous people over the years including President Chester A. Arthur who acted in a theatrical production at the Inn as well as Gerald Ford who was on assignment as a model for a Look magazine photo spread in Stowe.

In 1982 Marvin Gameroff, a Canadian visitor to the area, fell in love with the Inn and bought the property and later transferred it to the Gameroff Trust, the Inn’s current owner. To mark the building’s 150th anniversary the next year a major renovation was undertaken to renovate and restore all of the Main Inn and Depot Building original rooms as well as upgrade the building’s infrastructure and safety features. Plans included installation of air conditioning and cable TV as well as construction of a meeting space, outdoor swimming pool, fully equipped health club and the Whip Bar & Grill restaurant.

Almost annually since 1989, renovations have kept the Inn current with meeting travelers needs while keeping the lovely historic charm. Today, the Inn offers 103 unique rooms, elegant suites and luxurious Village apartments located in 8 buildings in the heart of Stowe Village.

The Legend of Boots Berry and The Green Mountain Inn

Storm sounds from your average run-of-the-mill winter snowstorm or the fancy footwork of an 1800’s spirit who supposedly haunts the Inn?

The story of former Inn horseman – now ghost – Boots Berry and his need to tap his way across the Inn’s roof in bad weather is the stuff of intrigue no self-respecting historic New England Inn should be without.

The son of an Inn chambermaid and horseman, Boots was born in 1840 in Room 302 of the Inn’s third floor servants’ quarters  and grew up to be a respected horseman himself.   He realized local fame when he saved stagecoach passengers from certain doom when the coach’s horses bolted down Stowe’s Main Street one day.  Deemed a hero and awarded a medal, Boots was lauded throughout the county and from then on found he was never in need of buying his own drinks again.

Drink proved his downfall, however, and Boots was dismissed from the Inn for neglecting his duties.  He took to wandering the country and got his nickname when a fellow prisoner in a New Orleans jail taught him to tap dance.

Boots eventually drifted back to Stowe.  As fate would have it, in 1902 Boots happened to be on hand to save a little girl who was stranded on the Inn’s roof during a snowstorm.  Remembering a secret childhood route to the rooftop, Boots reached the girl and lowered her to safety before slipping and falling to his death – from the roof above Room 302.

Legend has it that Boots’ rooftop tap dancing steps can still be heard today during a snowstorm.